Both Evaluation reports have been finalized with receipt of the Management Response from the CGIAR System Organization.

Given that the two dimensions have distinct set of issues and actors, and different impact pathways, they were evaluated by different teams using different methodologies, resulting in two volumes: “Volume I: Gender in CGIAR Research”; and “Volume II: Gender at the workplace”.  The two Evaluations were conducted in parallel and findings and information were exchanged at key times during the evaluation process, leading to the formulation of a common recommendation.

The main finding of both evaluations is that CGIAR has made significant progress towards gender equity since 2010.  Key institutions have been strengthened, and gender mainstreaming has been incorporated across all research programs. At the workplace, the Evaluation found an increased representation of women across all Centers and at all levels of the System, and Centers have developed policies that foster gender equity.

Though much has been achieved over the past seven years, there is still much to do in CGIAR to achieve its objectives.  For Gender in Research, the quality and expertise were found to be variable.  The evaluation recommended for CGIAR to develop a clearer vision and action plan for gender equity; greater consistency in gender research; stronger systems for monitoring and evaluations of outputs and outcomes and support to gender capacity and expertise. 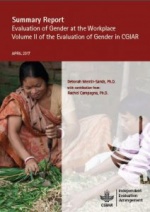 Regarding Gender in the workplace, the evaluation found that while moderate progress in representation of women has been made since 2008, women remain under-represented in professional, scientific, and leadership roles in the Centers at least to a moderate extent. It concluded that priority should be given to increasing the representation of women in groups that have the strongest bearing on the delivery of the Center’s missions, which will require target-setting and proactive recruiting.

A common high-level recommendation across the two evaluations emerged, which aims to capture the need for a holistic view on gender equity – one that encompasses all parts of CGIAR– whether at the workplace, research, or governance.

The recommendation calls for:

CGIAR to adopt an overarching, high-level CGIAR Vision statement on Gender Equity, covering both gender in research and gender at the workplace that would: enshrine the system’s commitment to gender equity in its overall scientific endeavour, requiring [CGIAR research programs]  to pursue efforts to integrate gender in their research; Centers to promote diversity in their workplace practices; and, provide an overall accountability framework on Gender for different system level entities, Centers and CRPs. System Council to appoint a ‘Gender Champion’ to lead the development of the vision statement, and to ensure, ongoing, that gender issues in research and at the workplace are kept on the Council’s agenda as needed.

This recommendation encapsulates the need for all aspects of gender equity to be seen as parts of a larger gender agenda for CGIAR – whether through the workplace and representation of women in different levels of the System, or through ensuring policies, research and programs, and monitoring systems are developed under the broader umbrella of gender equity in CGIAR.

The evaluation reports, and management responses, are available online

Evaluability Assessments are an Essential New Tool for CGIAR Managers

A Decade Later: Evaluative Evidence on How CGIAR Partnerships Improve Livelihoods and Environments Around the Globe